I'm just coming back from amazing trip to Jakarta & Bandung, Indonesia with my frens, Hamzah, Boboy, Bedz and Ina. We really had a splendid time there. 5days 4nites trip such a wonderful and felt like not enough to discover all the beautiful places in both cities. Below here is our itinerary :- 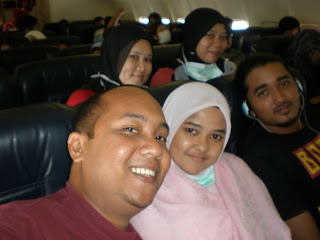 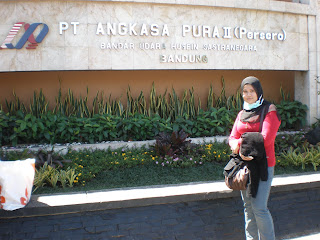 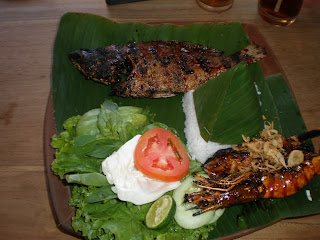 About 1/2 hrs later we reached hotel. After check in and did some refreshment we take a walk to Pakcik Met Resto. When we enter inside the resto so surprise coz the deco was really awesome. Balinese concept resto and the price also consider cheap. My frens they order nasi komplit with prawn, ikan kakap, cumi only cost Rp49k.
1 hour later we plan to take a cab to Pasar Baru unfortunately its really difficult to get a cab at that time. So we decided to try a new experience by taking Angkutan Kota. Forgot that Saturday or they called Hari Libur all the road are really conjested. Take about 1hour to reached Pasar Baru. I'm scared that we might not have enough time to shop at Pasar Baru coz it closed at 6pm. Once we reached @ Pasar Baru, we split with the guy. We only manage to shop @ 1 butik only. huhu so sad...Imagine that we spent time @ that shop for almost 3hrs...huhu until all the building tur 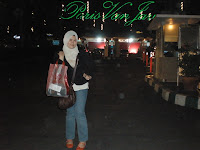 At nite we take a walk to Paris Van Java. As i mentioned it was Hari Libur, Paris Van Java pack with people and truly said that they are really fantastic in terms of dressing. KL pn tak macam tu. Memang update giler furthermore cewek & cowok nye ganteng skali deh..waduhh...Then we decided to lepak at the cafe but most of the cafe's occupied. We only managed to get seat @ KFC.
12 July 2009 (Sunday) : Bandung 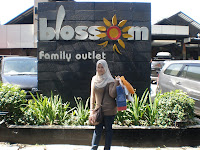 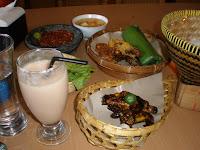 Before we go to next station, Pak Yanto took us for lunch @ Sambara Sajian Sunda Resto. Here also they served Sundanese food and the price also considered cheap but most preferable at Pakcik Met Resto..

Then we went to Riau area. Last trip i missed to shop at Riau. Riau also got alots of FO's ie : Renariti, Oasis, The Secret,Herritage, Branded Club, For Men, Terminal Tas & etc. FO's @ Riau much more choice compared to Dago but the price i think Dago is cheaper. Time show at 4.30pm we already tired summore the weather is very hot.


After that Pak Yanto drove us to Cibaduyut. Cibaduyut are well known with their leather product such as hand bag & shoes. At first I plan to grab 1 or 2 hand bag but nothing capture my eyes there. So i after take a walk a few shop, I choose to stay in mobil Pak Yanto. While waiting for others, I bought 1pkt of Tempe Goreng Rp20k. Tempe Goreng is 1 of their local snack that you should try. Beside that, they sell Pisang Salei in various flava such as choc, cheese, bluberry... 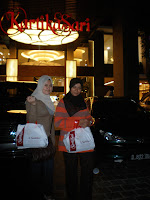 From Cibaduyut, last destination is Cihampelas or Jeans street. I don't like much this area so I just prefer to stay inside mobil. Here also have alots distros butik, their local brand name closet.
It almost 8pm means we only left 1hour to finish up our shopping tour with Pak Yanto. So to complete visit Bandung tour, we headed to Kartika Sari, 1 of the famous brownies in town. I bought 2 brownies, choc chip & almond Rp30k each. After that we also went to Amanda brownies. At Amanda I prefer their original brownies kukus. I bought 4 brownies.
Actually we planned to go to Rumah Mode after bought some brownies, unfortunately, time are too fast. So this time i missed to shop at Rumah Mode which is the most popular FO in Bandung. We reached hotel about 8.45pm.
Once we take our bath, yeahh this is the moment we waiting for...Spa time..Zen Spa just opposite our hotel. Actually I was plan to do full body massage. Is terrible cheap. 2hours massage only Rp150k. This time also i'm so frustrated. Actually for body massage we need to make an apointment. So this time we only can do foot reflexology. For 60mins cost Rp50k and their service a very tip top. After foot massage feel really fresh. We back to hotel to pack our things coz the next morning to continue our journey to Jakarta.
13 July 2009 (Monday) : Bandung - Jakarta 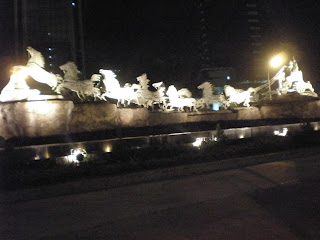 This morning we wake up so early coz we plan to catch Cipaganti Shuttle at 9am. After had our breakfast, we try to call for cab but none so no choice we have to chartered again Angkutan Kota to Cipaganti at Jln Dipati Ukur. Once reached there, we go to the counter to buy ticket but we have been told that trip to Jakarta (Cikini Station) sold out only left trip at 1pm. OMG thats too late coz by the time we reached Jakarta its almost 4pm and today is Monday pasti macet skali. We got no choice so we bought ticket for 11am trip to Kelapa Gading (Rp70k/pax) which takes about 1/2hrs to Jakarta Pusat. Luckily we already arrange tour guide for Jakarta (Rp500k/day). His name Pak Erwan. Got Pak Erwan's contact from one of the blogger, Kak Leez. So Pak Erwan will fetch us at Kelapa Gading Mall. 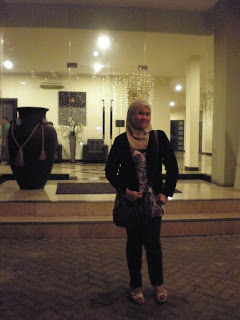 We reached Jakarta about 1.20pm and we wait for Pak Erwan. Our first destination is N1 Hotel (Rp250k/room/nite) which located at Jln KS Tubun, Jakarta Pusat. This hotel also recomended by Kak Leez. Only 5mins walk to Pasar Tanah Abang. But this area a bit congested with vehicles. After check in, we ask Pak Erwan to drove us to Resto for lunch. Jakarta is famous with Masakan Padang. He brought us to Rumah Makan Sederhana not too far from our hotel. The special about Masakan Padang resto is we only pay for what we touch. The dishes I think more than 10 so you can choose what ever you wanna eat. 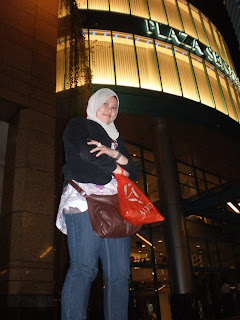 After take our lunch, we went to Pasar Tanah Abang..Waduh macet skali even dekat jew from our hotel. Better u take a walk rather than you go by car. Half an hour later we reached there. If u take a walk only 5mins. We only have 2hours to cover Pasar Tanah Abang and I know I will not have enough time. I only manage to cover 2level which is B1 & B2...huhu...so sad...I bought 3 ready made kebaya (Rp80k each). Then I wanna look for other things but the shop are start to close. Owh noo.... 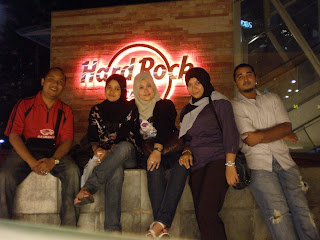 At nite, Pak Erwan drove us Plaza Senayan. At this time, all Jakarta shopping mall having their mega sale. Everywhere you can see sale up to 70%. After that we went to Hard Rock Cafe. Wow really happening. We just walk outside and lepak at the Starbucks. So now is the time to pose again. For memories to bring back to Malaysia..hehehe.. 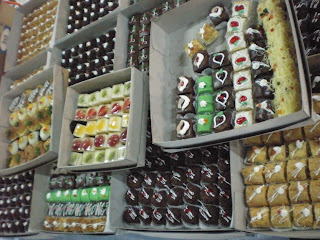 From Hard Rock Cafe, we went to the Pasar Senen. Its open 24hours. Here you can find colourful and cute icing cake at the super cheap price. 1 box of icing cake cost only Rp15k. 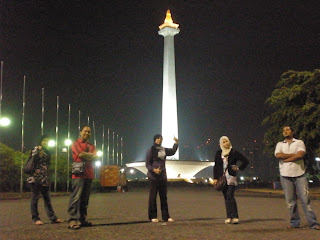 After Pasar Senen, we headed to one of the tourist spot, MONAS. After take a few pix, Pak Erwan drove us to elite house area, Jalan Jaksa the famous for the backpackers and last back to N1 hotel. 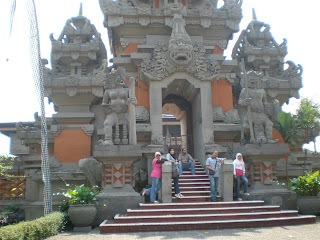 Today we wake up early. Ina, Bedz and me plan to walk to Pasar Tanah Abang before we start our journey to visit all the tourist spot. I would recommend to buy outside the Pasar Tanah Abang building coz the price are much more cheap compare to inside. You gonna be crazy here. Feel like wanna grab everything...hehee...So for the first destination is Taman Mini Indah Indonesia. Here similar like our Taman Mini Malaysia located at Melaka. They are 27 of the local ethnic houses such as Bali, Sulawesi, Jawa, Minang and etc. The area are so huge. We spent time there almost 3hours. Love their building arts. 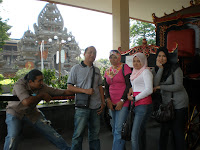 After TMII, we headed to Mangga 2. Take our lunch at A&W ITC Mangga 2 then take a window shopping there. I manage to get 2handbag at Rp50k each. ITC Mangga 2 also famous with the fake branded handbag. Here also you can buy beads, brooch at the cheaper price. Actually we plan to go to Ancol after shoppe at Mangga 2 but at that time is peak hour. Macet yang sgt teruk so we just go back to hotel. 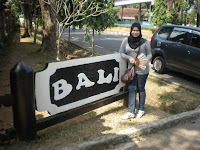 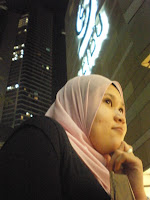 Seems tonite is our last day here, so we need to fullfill our time. After refreshment, Pak Erwan drop us at Plaza Indonesia..one of the luxurious shopping mall. As i mentioned earlier, Jakarta are having their mega sale so you can find Esprit, Topman, Dorothy Perkins, Guess, ZARA, MNG and many more sale up to 70%. Hamzah bought Esprit jeans less than RM100...wow consider cheap. But the price for MNG and ZARA are still high even after discount compare to Malaysia.

Lastly we spent time at Warung Desa located at Sabang. Open 24hours. Eat their bakso (Rp13k) quite nice. While having our dinner+supper, we just cit cat bout our trip here.
We need to go back to hotel early coz next morning around 4am we have to check out. Our flight is at 625am. 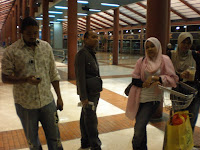 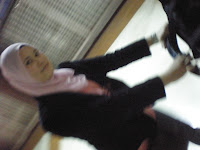 Check out at 4am then Pak Erwan send us to Soekarno Hatta Airport (Rp150k/trip). After check in ticket and clear for imigresen, wait for our AA flight Qz7690 back to KL. We reached LCCT almost 10am. Even we really tired for the tight schedule trip but we really enjoy and we planned to re-visit again...

That all my story for spledid holiday with my beloved frens.

Buzu Ediany
Georgetown, Penang, Malaysia
...I am JuSt an OrDinary huMan BeiNg That tRy to BuiLd Up mY Own StrEngtH...WaNna FuLfiLL my liFe wiTh bEaUtiFuLL aNd sWeeT mEmoRiEs wIth aLL thE peoPle tHat i LuRve... 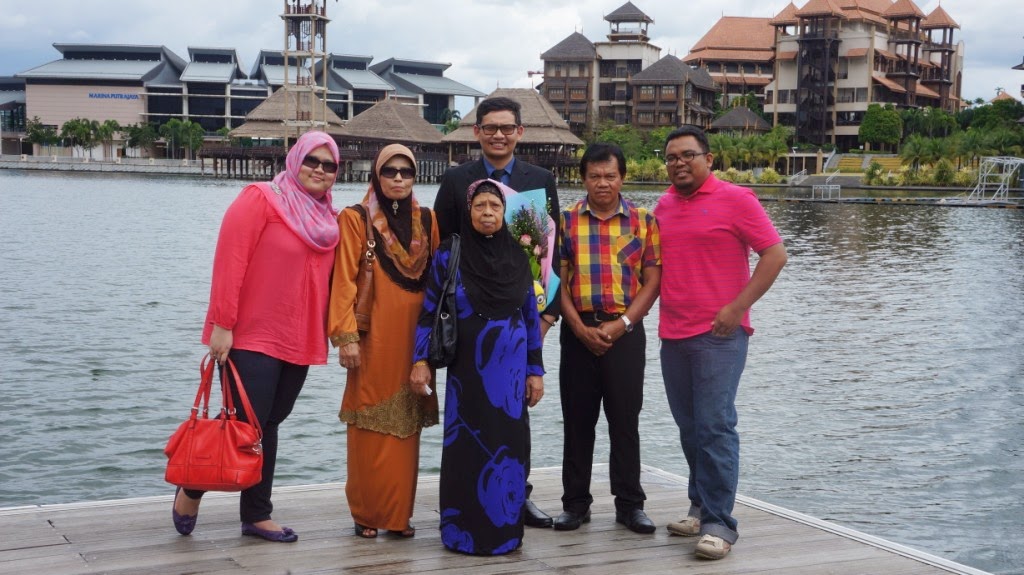 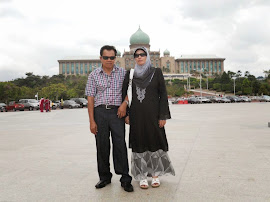 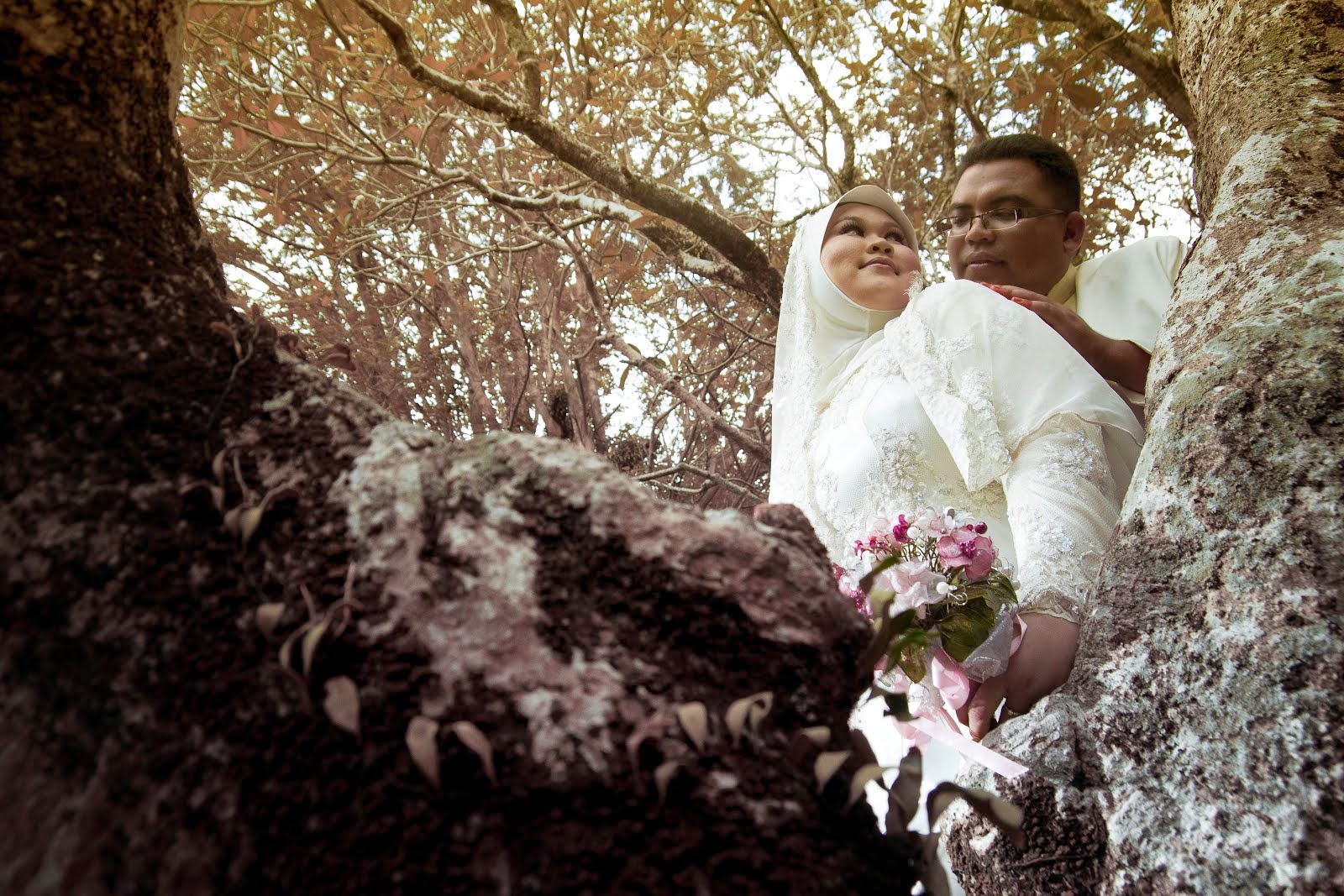 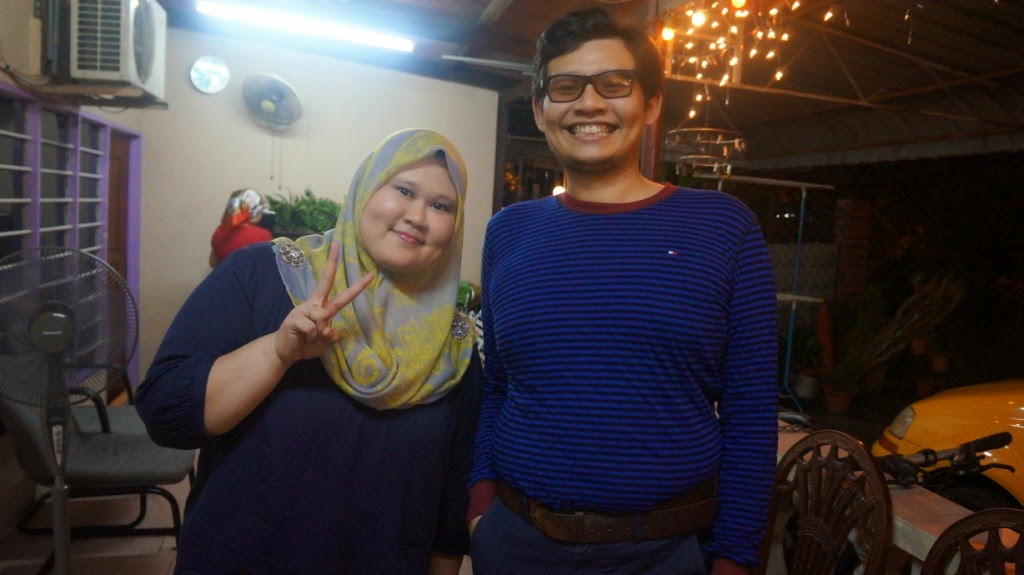 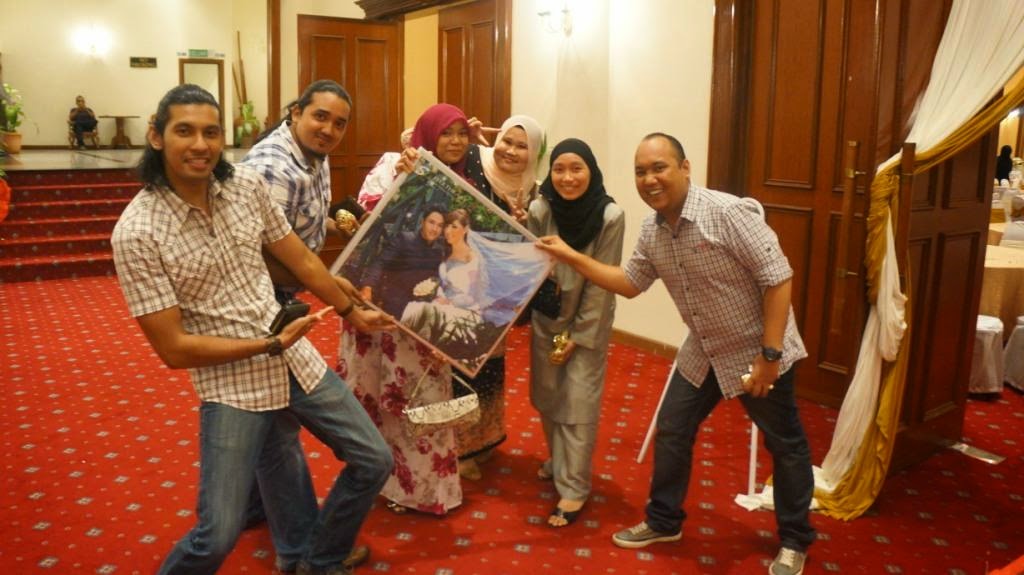